We now only have four remaining puppies. Pink and Purple girls left together last week. Purple will be moving to Holland in December and Pink will be staying in Atlanta. I am glad they will be together for awhile to ease the transition.
Meanwhile we still have Red, White, Blue, and Orange. They are a fun and easy little group. I think it is about time we gave them names. Red will be staying here with us and we have named her Glenarrif's Olympic Dreams and we are calling her Dreamer. Hopefully she will stay Dreamer and not be renamed Nightmare (or Freddie Kruger) like a previous dog! Blue boy has to be named Olympic Record so he can be called Phelps. He pretty much landed that name at birth. The other two we have not named yet as we had hoped their new owners would name them. I like the names Dara (the 40+ swimmer) and Misty(beach volley ball); not sure about names for the Orange boy.
We have been super busy and have not had much time for picture taking. Maybe today!!
Posted by Mrs. June Mann at 9:33 AM No comments: 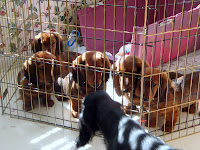 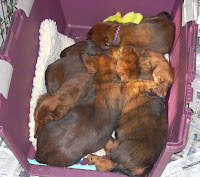