Nine is a lonely number!

Today we had to say goodbye to a puppy, it was so hard. I had noticed that Pink girl seemed to be bumping into things and had an odd look in her eye. Her skull was also slightly domed. My vet confirmed what I had already suspected, she had hydrocephalus, a condition in which fluid builds up in the skull causing blindness and other neurological impairments. I consulted with my vet and a veterinary neurologist at UGA, Pink's outlook was grim and potentially painful. I had to make the very tough decision to let her go. This little girl had known nothing but love, warmth, and a full tummy her entire short life; and that was all I wanted her to know.  So, now there are nine. I wanted to laugh tonight so I purposely took pictures of them when they were at their absolute nastiest-right after eating. I assure you they clean up nicely! 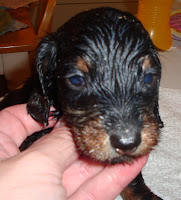 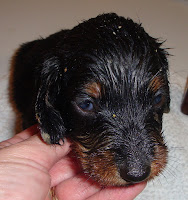 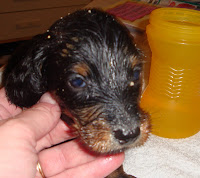 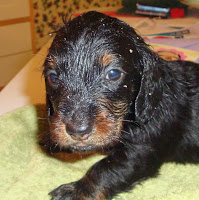 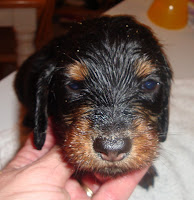 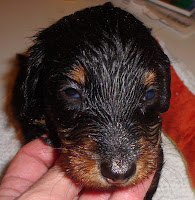 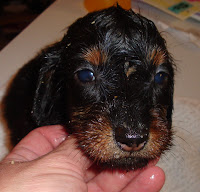 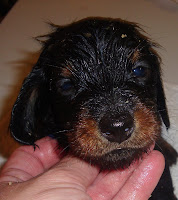 We are four weeks old today! 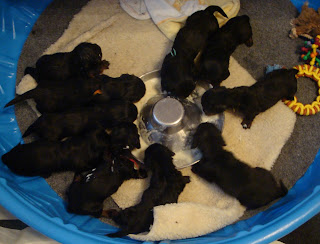 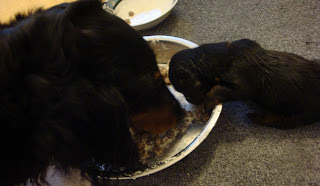 I am always amazed at how quickly puppies seems to change between three and four weeks. Today I started them on mashed up puppy food combined with the cereal gruel they have been getting for a week. The LOVEd the food and scarfed it all down at each meal.
Tonight we watched them playing and interacting with each other. They are so cute!
Posted by Mrs. June Mann at 12:36 AM No comments: 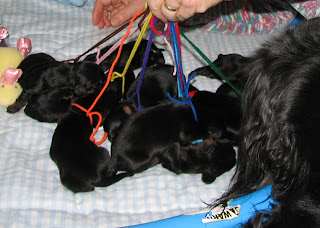 Oh they are such a gifted litter, they are already working on walking on leads!!  Their mother, who hated walking on a show lead is watching and cheering them on!
Posted by Mrs. June Mann at 9:28 PM 1 comment: 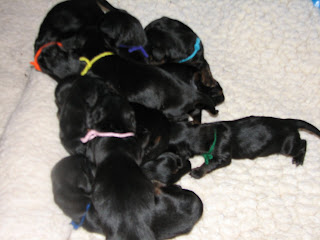 March 3rd was day three for the puppies. They all continue to do well, and Oneder is improving too. I will always consider this litter a small miracle; I can't believe Oneder and ten puppies survived their ordeal!
Posted by Mrs. June Mann at 7:09 PM No comments: 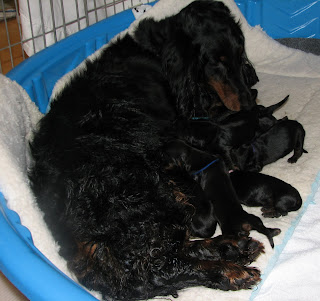 It has been a rough two days but Oneder finally feels well enough to announce the birth of her TEN puppies!  The final count is three girls and seven boys!  Many, many thanks to Deby and her dog Spinner for helping to make sure all ten puppies and Oneder were well taken care of! 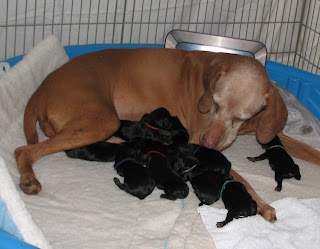