Thank you for visiting the Glenarrif dachshunds page! We are a small show kennel located about an hours drive north of Atlanta. Our dogs are companions first and show dogs second. Health and temperament is very important to us and all breeding stock has eye, heart, and thyroid testing done. In addition our puppies are raised in our kitchen and temperament tested at seven weeks.

It has been quite a while since I last updated. That was mostly because of a lack of news. Well, this  summer and fall that has changed and there are many good things to blog/brag about. First, in July Glenarrif had THREE new champion boys!!  This was an awesome accomplishment and made me very proud.  Chipper, CH. Glenarrif's Man on Third finished, after a very quick show career.  His brother, Andruw, finished the following day at the same circuit. Andruw is now CH. Glenarrif's Fielder's Choice.  Probably one of my happiest wins came in July also. Sent to a perfect pet home in CA needing one point, Trooper was a dog I never expected to finish. However, thanks to the love, wonderful conditioing, and tenacity of his owners it happened. Trooper is now CH Glenarrif's Army of One. This is even more sweet because his championship was a surprise for one of his owners who is currently serving his country in Afghanistan. Way to go Trooper and lots of love and thanks to Adam and Maribel!!!!! Misty from the Olympic litter is now CHAMPION Glenarrif's What About Me. Misty finished in record time thanks to being shown by someone other than me! So, I guess four new champions in a short period of time is something to write about; especially when I do not breed many litters to start with!!
There is also lots of good news from the "Blessings" litter.  Kelsey, Glenarrif's Bless You, owned by Alnee and Andy Baldwin and me, went Best Puppy at a dachshund speciality in VA at the tender age of six months. Mo, Glenarrif's Blessing In Disguise, owned by my family, won  Winners Dog for his first point from the 6-9 class under well-respected Pat Trotter. Not to be out done by his sibs our Alaskan blessing, Glenarrif's Hawaiian Blessing, owned by Vikki McConnel and me, was WD/BOW/BOS for three points!!  Congrats to these dogs and their awesome owners!
Posted by Mrs. June Mann at 2:35 PM No comments:

From Ten To One!


Sunday was a very bittersweet day as we said goodbye to two more of the Blessing babies. "Teal" and "Blue" went to their wonderful new homes, and"Black" will be staying here. The lack of sleep and huge amount of work involved with this litter is now a blur and all that remains for me are the happy memories of  an incredibly pretty, funny, busy, and sweet group of puppies.  I REALLY miss them; each one had  unique and endearing qualities that left an impression in my heart forever. I was very selective about where each puppy was placed and feel confident they are all in the the special homes they deserve.

Blue
Blue is now living with Randy Dudley and "Happy" Ch. Glenarrif's Talk of the Town, in Athens, GA 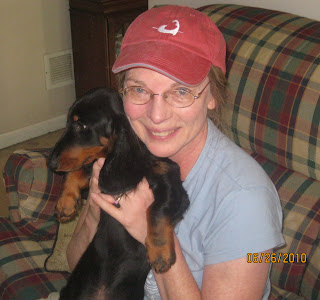 Teal
"Teal" is now living with Cris Smith and David Dolloff in VA. He will also be sharing his bed with other Glenarrif dogs, Glenarrif's Keeping Time and Glenarrif's Rhythm and Blues. 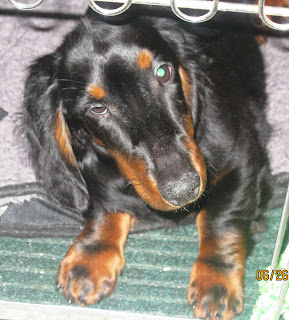 Black
Black will be the unfortunate pup who gets to live here and be a dog! There is no doubt he too will be loved and spoiled as much as his siblings.
Posted by Mrs. June Mann at 8:30 AM No comments:

The girl's softball games. work, school, and life in general has been the cause of my not posting lately. I mean to but seem to never get the time! Many good things have happened since my last post so I think it is time for some updates!

Brown boy is now Oliver and is living with Steve and Roni in Atlanta. 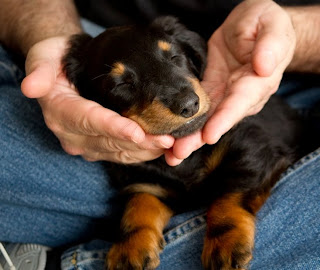 Green boy is now Cooper and is living with the Cabeens and his other dachshund siblings in Chattanooga, TN 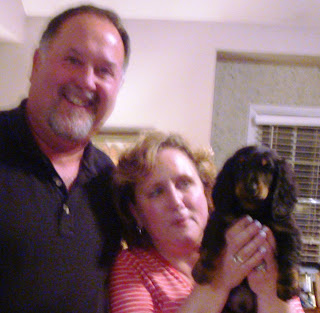 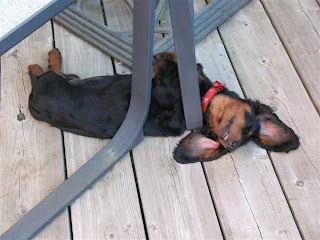 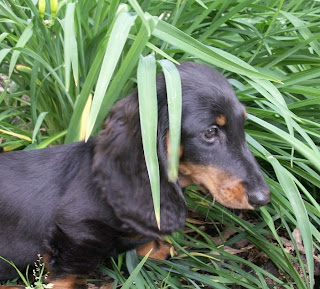 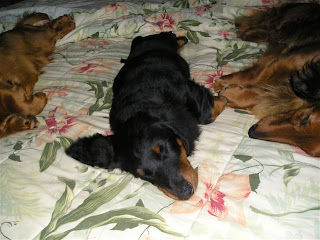 Purple boy is now Milo and lives with the Murray family in Charleston, SC 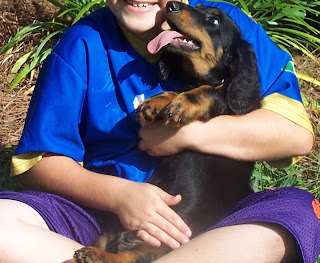 And I still have the "Three Musketeers Black, Blue, and Teal!! 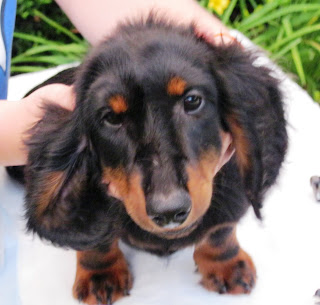 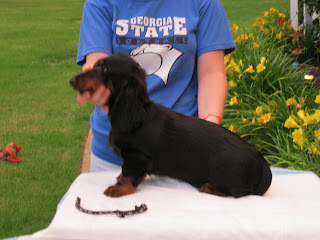 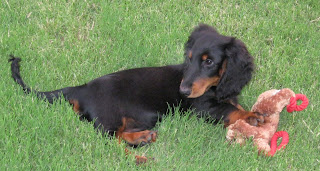 Sorry for the lapse in updates, I have been really crazy with family and school activities Anyway, here they are at ten weeks! I love this litter, they are funny, happy, and very easy to care for. 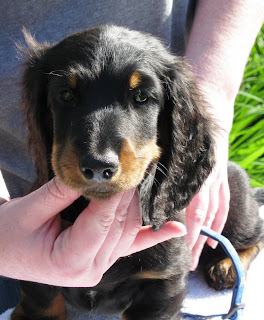 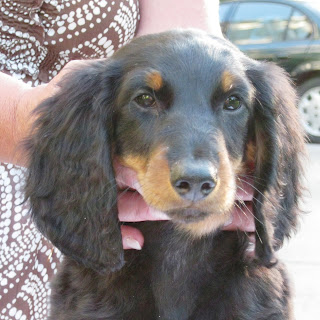 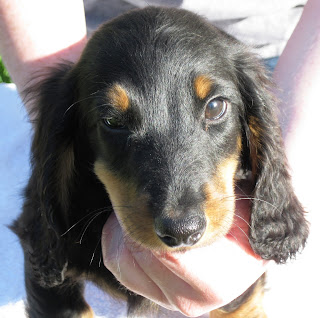 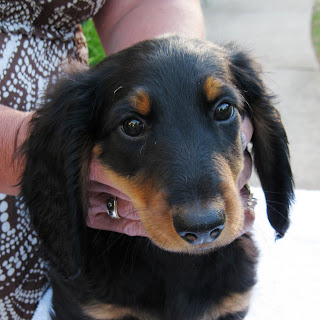 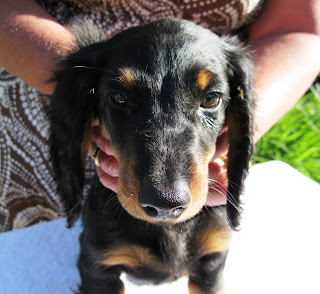 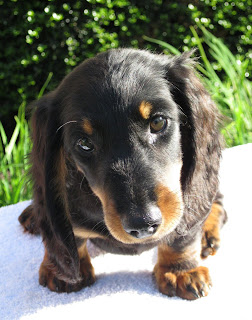